Downtown Manhattan: Broken glass and graffiti lined the streets of Manhattan Monday morning, in the aftermath of the weekend’s mass George Floyd protests. Streets that are normally characterized by the upscale restaurants and luxury designer storefronts that occupy them, were instead reflective of the fury and discord that has consumed the nation in response to the murder of George Floyd.

George Floyd, a 46-year-old African-American man, was killed in Minneapolis on May 25th during an arrest in which he was handcuffed face down on a city street while a police officer kneeled on his neck for over eight minutes. Onlookers captured video of the event which soon went viral on social media, inciting widespread rage over the monstrous injustice. Black Lives Matter protests have since broken out in cities all over the world, many of which have escalated in violence and public destruction.

New Yorkers were left to assess the damage on Monday morning, as many were seen sweeping glass and boarding up broken storefront windows. “I can’t breathe,” the words George Floyd spoke in the moments leading up to his death, were found emblazoned in graffiti on a city building. Surrounding businesses were left to board up the remains of the damaged storefronts, while onlookers took pictures of a vandalized police car that had been set aflame the night before.

Looters broke into a SoHo Rolex store during rioting and stole $2.4 million worth of watches, police sources said Monday.

Video shows 20 people breaking through the front door of the Greene Street store before fleeing a short time later when police arrived
“The Rolex store is empty,” the NYPD confirmed. “They stole like $2.4 million in Rolexes.”

The store was one of many in the neighborhood in lower Manhattan looted after daytime protests ended and the moiod turned evil at night. Social media postings show that a Chanel store, Gucci, H&M, Bloomingdales, Lululemon and Apple were among those damaged.

Chiara de Blasio, 25, was busted on 12th Street and Broadway, as part of a group of about 100 people who were throwing objects toward cops, the NYPD said in issuing a bench ticket. 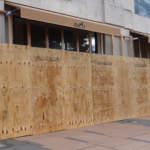